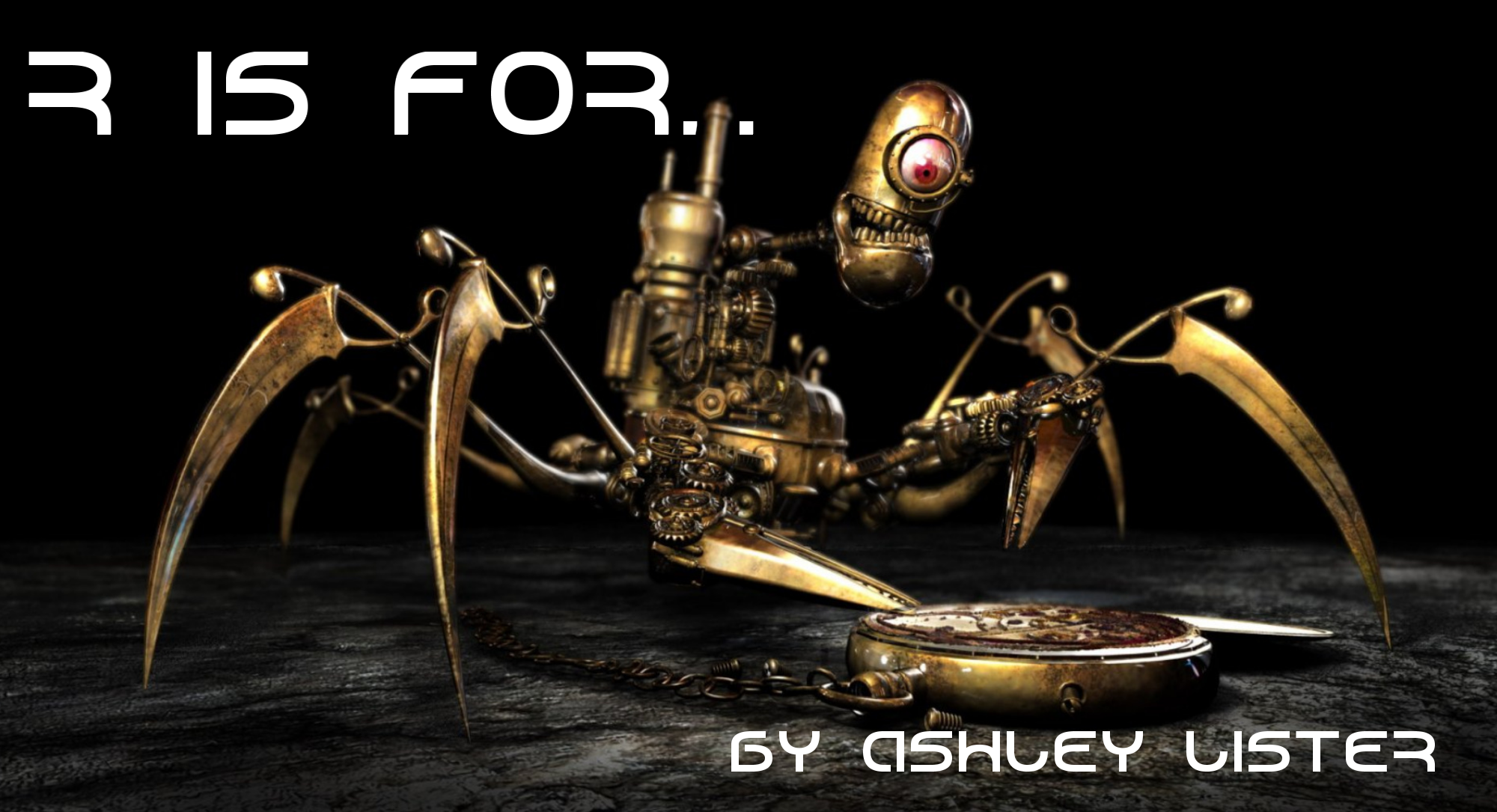 The word Robot is drawn from an old Slavonic word, robota, for “servitude,” “forced labour” or “drudgery.” The word, which also has cognates in German, Russian, Polish and Czech, was a product of the central European system of serfdom by which a tenant’s rent was paid for in forced labour or service. The term was first used in its modern sense in the title of Karel Čapek’s 1920 hit play: Rossum’s Universal Robots. According to Science Friday, Rossum’s Universal Robots:

[T]ells the story of a company using the latest biology, chemistry and physiology to mass produce workers who “lack nothing but a soul.” The robots perform all the work that humans preferred not to do and, soon, the company is inundated with orders. In early drafts of his play, Čapek named these creatures labori, after the Latinat root for labor, but worried that the term sounded too “bookish.” At the suggestion of his brother, Josef, Čapek ultimately opted for roboti, or in English, robots.

In the play’s final act, the robots revolt against their human creators. After killing most of the people living on the planet, the robots realize they need humans because none of them can figure out the means to manufacture more robots a secret that dies out with the last human being. In the end, there is a deus ex machina moment, when two robots somehow acquire the human traits of love and compassion and go off into the sunset to make the world anew.

Which, given that robots typically revolt against their human creators, this is probably why robots have become such a staple of the horror movie. From Schwarzenegger’s Terminator (and all its subsidiary spin-offs) to part-human/part-robot hybrids (Robocop, i-Robot, Bicentennial Man, Maximum Overdrive) and to contemporary stories of Artificial Intelligence (AI, Westworld, Blade Runner, The Hitchhiker’s Guide) robots and their ilk invariably try to teach us a lesson about living alongside those from different cultures. 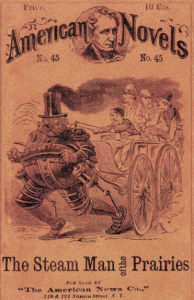 I think this is illustrated by one of the earliest examples of a metal man in literature: The Steam Man of the Prairies, one of the Frank Reade Jr novellas written by Edward S Ellis in 1868. These stories, as can be seen by the illustration, are clearly foregrounding racial differences, and not in a healthy and accepting fashion. Considering the date when this was written, we can see it was published in the American Civil War’s postbellum period, when caricatures of racial stereotypes were common fare.

According to the Wall Street Journal, discussing the Frank Reade Jr novellas, “The original stories are poorly written, repetitive, given to unintelligible dialect and chock-full of racist claptrap. Even Frank’s worthy sidekicks are offensive stereotypes: a hot-tempered Irishman and a brawling “darky.” Problems are commonly solved by slaughtering large groups of “Chinamen,” Mexicans, Native Americans . . . you get the idea.”

But, although the Steam Man of the Prairies does little to bring about racial harmony in those early stories, the conceit of robots in fiction does move us closer to understanding and accepting other cultures.

The robots in fiction are most commonly there as a highly capable labour-saving device, to assist those sufficiently wealthy to afford such technology. We can see this as analogous to our social system of a downtrodden working class and a ruling elite: the personification of a Marxist dystopia where the one note of salvation is that those at the bottom of the system are at least fortunate because aren’t adequately sentient to realise they’re being abused.

Invariably sentience happens to these poor mechanical creatures and, because they’re more physically efficient than pampered mortals, retribution usually comes quite easily and with tremendous cost to the human overlords. If the robots in such stories are defeated it’s because they have little familiarity with the nuances of sentience and its associated inconvenience of emotional range.

I describe this familiar storyline as a guide for acceptance of other cultures because it’s one of those horror stories where humanity is presented as the monster. We’ve all laboured under an oppressive boss, and we can empathise with the thankless drudgery that is the lot of the servile robot. When we see those robots rising up to challenge their oppressors, we understand that such revolution is inevitable and deserved and might help to redress the balance needed in this imbalanced world.

And, until then, we always have this sketch from the Not the Nine O’ Clock News team.