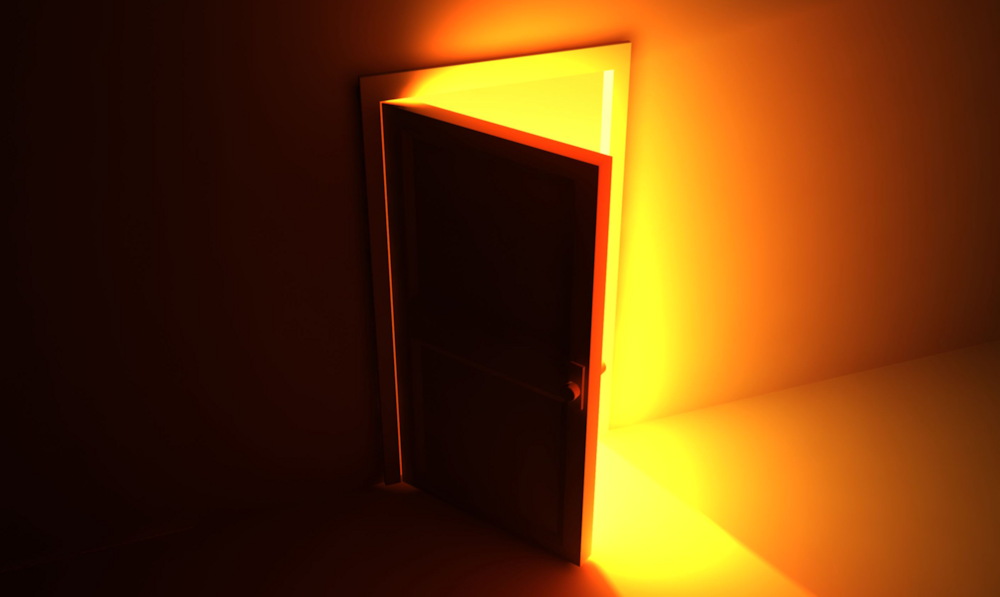 It was pitch black. I’m not talking about the blackness of night. No, this was the blackest
black you could imagine. You may be thinking that I really mean, ‘just really dark’,
but you’d be wrong. It was black. No light. Just black.

A door appeared. No fuss, it made no sound, it just appeared. It could be seen in the
darkness of black bathed in light with no discernible source. As doors go It was
ordinary, but it was also beautiful. It was standard height and width. It stood in the
blackness surrounded by an ordinary door frame. No wall for the frame to sit in. Just
the frame and the door.

The only odd thing about the door was that it stood, bathed in light, alone, in the
blackness.

The door was made from mahogany and had wonderful paneling, six on each side.
The doorknob was highly polished brass, mounted on a brass plate with a keyhole
that cut into its, otherwise unblemished, surface. Doors aren’t male or female and
doors can’t see like you and me, but they can see and they can sense, but on the whole,
they’re just doors.

This door wondered what the hell had just happened. One minute it was thinking
about door things, the next it was here, surrounded by the darkest black it had ever
known. What could have happened? What should it do? It tried to open, but couldn’t.
It appeared to be locked.

‘Hang on a minute! That wasn’t there a moment ago.’ Thought the door.

It concentrated on turning the key, but nothing happened. Maybe it wasn’t trying hard
enough, so it tried again. Nothing, not even a slight twist. The door
was getting annoyed. It tried again, rattling in the frame, hoping that it
would get the key to engage the lock. It didn’t work.

The door could feel itself starting to panic again, so it tried door relaxation techniques.
It wasn’t usually a highly-strung door, but there are times when even a door gets
depressed with doing the same thing every day. Open, close, open, close. It used to
long for the days when it could ‘SLAM’, or even stay open for hours on end. It had
become so numb to the everyday, that it decided it needed help. It booked itself in
with a door specialist who taught it the very relaxation technique it was now using.

The door calmed down, but it was annoyed at the key’s lack of cooperation.
Out of the blackest black, a hand appeared, nothing attached to it, just the hand. It
wasn’t a remarkable hand. It had the usual four fingers and a thumb. It wasn’t
recognisable as being a male or female hand, it was just a hand.

The door sensed the hand and was curious. What did the hand want? Was it going to
help the door? The door was hopeful, and rightly so.

The detached hand reached toward it.