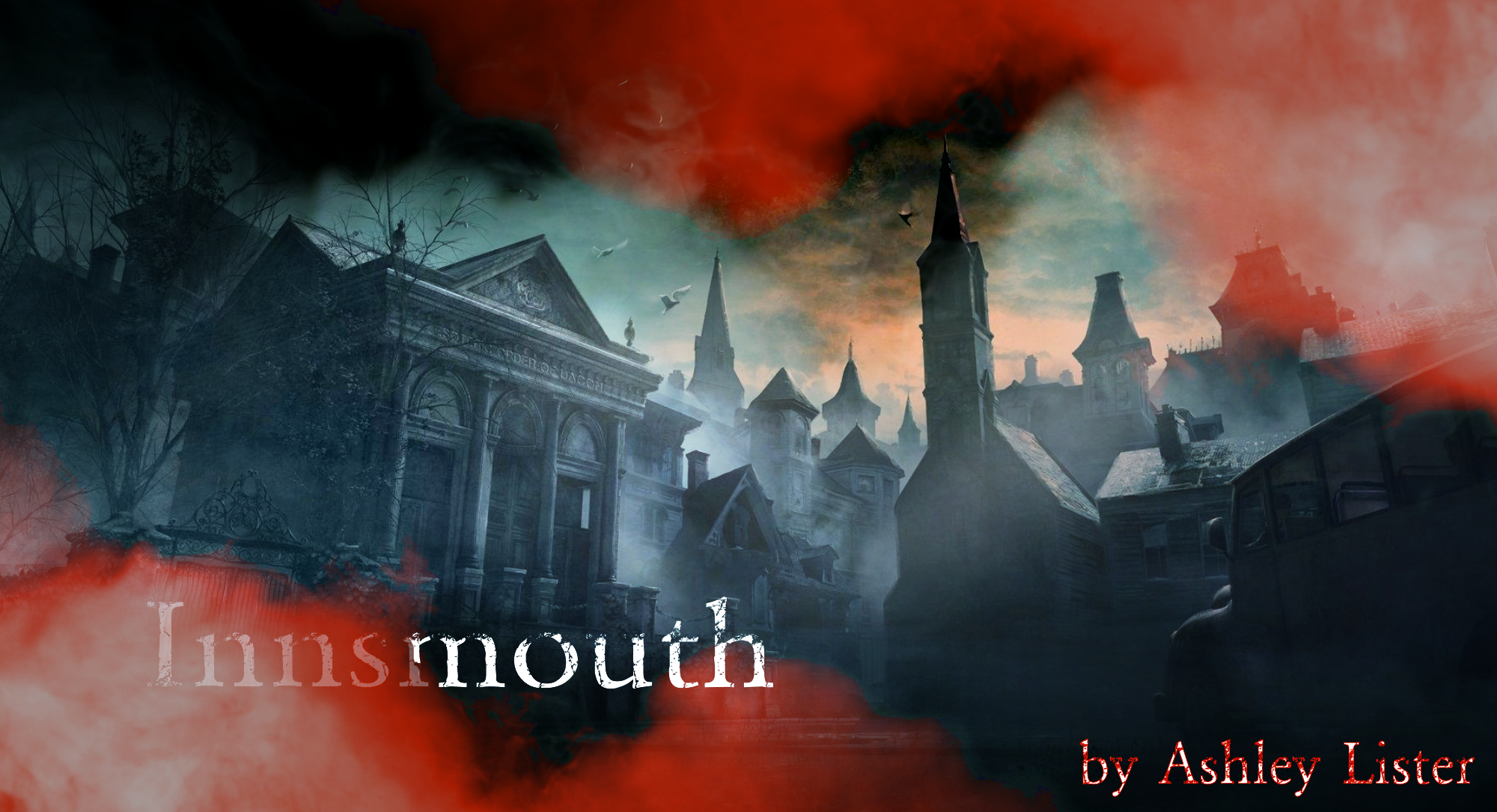 I’m not using this blog post to promote my own series of novellas, released under the heading of dark tales from Innsmouth. Today I just want to talk about the inspiration I’ve taken from Lovecraft’s description of Innsmouth.
Innsmouth is a fictional town in Massachusetts created by American author H. P. Lovecraft as a setting for one of his horror stories. It’s been referenced subsequently in some of his other works and by other authors who have written stories taking place in the world Lovecraft created. Curiously, Lovecraft first used the name Innsmouth in a 1920 short story ‘Celephaïs’, where it refers to a fictional village in England. Lovecraft’s more famous (Massachusetts) Innsmouth, is found in his 1936 story ‘The Shadow Over Innsmouth’. Lovecraft apparently called Innsmouth, ‘a considerably twisted version of Newburyport, Massachusetts.’

My interpretation of Innsmouth is set on the west coast of the UK, and is a small university town plagued by mysterious happenings. It is unlike the location Lovecraft described, save for it being set by a sea and being home to events that are often inexplicable, mostly disturbing and sometimes fatal.

For Lovecraft, the town of Innsmouth is described as being in a horrendous state of decay, with many of the buildings rotting, and on the point of collapse. In ‘The Shadow Over Innsmouth,’ Olmstead, the protagonist describes his first sight of the place:

It was a town of wide extent and dense construction, yet one with a portentous dearth of visible life. From the tangle of chimney-pots scarcely a wisp of smoke came, and the three tall steeples loomed stark and unpainted against the seaward horizon. One of them was crumbling down at the top, and in that and another there were only black gaping holes where clock-dials should have been. The vast huddle of sagging gambrel roofs and peaked gables conveyed with offensive clearness the idea of wormy decay, and as we approached along the now descending road I could see that many roofs had wholly caved in. There were some large square Georgian houses, too, with hipped roofs, cupolas, and railed “widow’s walks”. These were mostly well back from the water, and one or two seemed to be in moderately sound condition….

Yet there is more to Innsmouth than decay and rot. Olmstead is a student on an antiquarian tour of New England. He sees a piece of exotic jewellery in a museum and is told it came from the somewhat neglected seaport of Innsmouth. Innsmouth is not a peasant place. Aside from the ruin of the buildings there is a drunken resident who tells Olmstead stories about the aquatic monsters from Innsmouth who interbreed with the locals to produce amphibian hybrids. Naturally, Olmstead dismisses these stories as the ramblings of a drunk but he begins to give the man’s story some credence when he spends the night in Innsmouth and finds himself being attacked and pursued by amphibian hybrids.

This notion of interbreeding and the unnaturalness of hybrids plays into Lovecraft’s ideologies, which are politely described as ‘problematic’ by some and more accurately defined as ‘obscene’ by others. Lovecraft was a eugenicist and racist and for those who think that latter label is a harsh accusation, or based on twenty-first century morality, judging the political ideals of the early twentieth century, I’d ask you to read his poem through this link: Lovecraft Poem.

It is possibly because of these horrific views that Lovecraft’s monsters have stood the test of time. We are being presented with a mythos created by a man with abhorrent beliefs with regards to race and equality. That mythos includes characters, such as Cthulhu and Dagon, who have their own perspective on the racial purity of the Elder Gods and the Deep Ones, and their own unequivocal claim to mastery over subordinates. This is certainly the reason why I found Innsmouth to be inspirational for the idea of a series of horror stories: because, even without monsters, it represents a frightening belief system of entitled superiority over the inferiority of lesser mortals that we nowadays seldom see outside the discourses of UKIP, Brexit or Tory party conferences.

Do I condone Lovecraft’s beliefs? Of course not: racists are hateful pieces of crap. Do I think Lovecraft was justified in producing stories that have built monsters from his twisted notions of eugenics? No. I don’t think he was justified: but I also understand he was a product of his time, and his creative output was clearly shaped by his abhorrent views and the echo chamber of his peers. However, ask me if I want people to read stories about a world that’s made frightening by these inspirations, and the answer is a resounding YES. It’s yes because horror stories are meant to make the reader uncomfortable. And, as much as we want to believe these attitudes are a thing of the past, we all know that they haven’t gone away yet, which adds another layer of disturbing realism to the realm of the horror fiction.